The exact origins of pickling are unknown, but the ancient Mesopotamians may have used the process around 2400 B.C. Pickling was used as a way to preserve food for out-of-season use and for long journeys, especially by sea. Although the process was invented to preserve foods, pickles are also made and eaten because people enjoy the resulting flavours. The term pickle is derived from the Dutch word pekel, meaning brine.  French pickles are usually small white onions (Petits onions) or small gherkins.  The small pickled gherkins are called Cornichons. They are usually made with strong vinegar. The tiny gherkins are not easy to come by.  USA is the seventh producer of gherkins and cucumbers with 747.6 thousand tons in 2016. Today we will use medium size gherkins. For this recipe you will need some glass jars that you can hermetically seal. They need to be cleaned with hot water and at best you can let them dry by themselves. For this recipe I am using 54 oz jars (1.5L).

Some recipes will tell you to put the gherkins in salt and to let them for a while, this is not necessary for medium or small gherkins.

An alternative version is to use boiling white vinegar, if you close off the jars straight after filling them, it will create a vacuum inside, when cooled down. This will ensure a better preservation, however it will soften the gherkins a little and discolour them slightly.  In the following picture, the two jars on the left are made with cold vinegar and the others ones with boiling vinegar. Pickled food will easily keep for over a year, maybe more. When you open the jar, you should hear the air coming in as you break the seal, if you see mold inside the jar discard it, the seal was not hermetic. 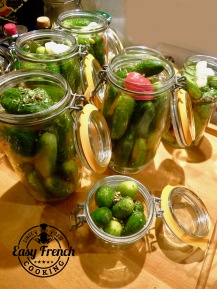 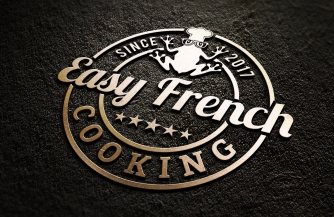